With species available all year round, Costa Rica has a great fishing scene for anglers traveling at any point of the year. This is how to decide what time is best.

This strong fish will try to outmuscle you every inch of the way. A real catch!

Also known as the Silver King, this massive fish is a real trophy.

Yellowfin Tuna are both strong and tasty. Don’t miss out on one!

When is the Best Fishing in Costa Rica

This is the golden question, and the truth is Costa Rica offers great fishing all year round. Whenever you come, there is something to fish.

Some areas in Costa Rica may have better numbers of a specific fish during a certain month. If your dates and destination don’t match your prime species goal, consider an inshore trip.

In the end, success for most is about action. Targeting what is biting for your plans will help ensure a great trip.

Having a clear expectation of what species to fish for. When the best months to fish for them. And where to fish increases your chances of having an enjoyable fishing vacation.

If you’re traveling schedule has date or destination restrictions, no worries. Ask our local experts what they recommend and they will offer expert advice on what to fish for.

This is why we’ve put together a fishing calendar for Costa Rica’s different fishing seasons. With professional, local advice, it’s easy to see when it’s more convenient for you to travel into the country.

With fishing and hotel partners all over the country, you can go and stay anywhere. Simply let us help you decide when. 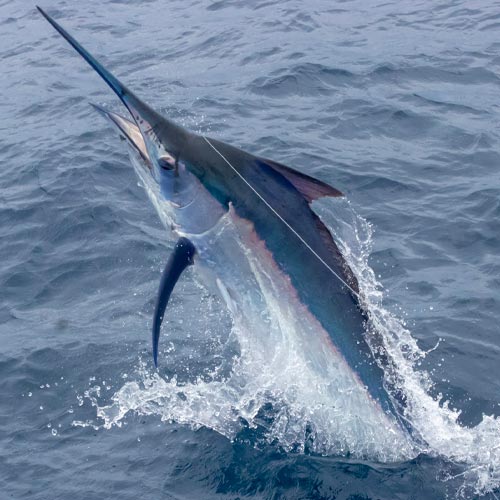 The best way to express our trip is Awesome ! Captain and crew were beyond accommodating. Highly recommend

A Fishing Calendar for Costa Rica

The great news is, fishing is good in Costa Rica throughout the year! Certain areas are better than other areas at different times of the year.

Take a look at a quick recap of Costa Rica’s fishing seasons. Depending on the month you are traveling and the location you’d be staying might impact your success.

The end and the beginning of the year are the best months to catch the migratory species of billfish. The Central Pacific area is your prime destination. Three of the best departure points for anglers are Los Sueños, Quepos, and Drake in the Osa Peninsula.

During these months the waters of the Central Pacific are warmer and attract more life. This concentration of life attracts large schools of pelagic fish. If you want to chase after fish during your the Holidays season, then this is the best place and time to do it.

In the meantime, the North Pacific is a bit windier than the Central Pacific. You can find both offshore and inshore species here, but the fishing conditions can vary.

Both areas are great for inshore.

May marks the beginning of what we call the transitional months. Great fishing in all parts of Costa Rica’s Pacific Coast.

During the transitional months, you can target all our species in any of the popular areas.

As the weather patterns change around the central Pacific, fish begin to move. Sailfish specifically start to move north following shoals of bait. Marlin, Tuna, and Dorado remain great in all parts of Costa Rica.

During this time, the North Pacific sailfish bite begins to heat up and the weather remains great.

The Central Pacific starts the afternoon showers and water conditions change. This pushes Sailfish north. As the afternoon rains start, the Dorado show up in great numbers. These fun fish provide endless action for offshore anglers.

These months also signal the peak season for our famed FAD trips. As the migratory baitfish move in, the large predatory fish like marlin come in as well.

During May – November, the offshore action fishing the FADS on Costa Rica’s seamounts takes off. Double-digit marlin bites a day is not uncommon.

The Caribbean has two peak seasons for its two most famous target species, Tarpon and Snook. These months are ideal for anglers in search of these species.

Calm seas and easy access to the river mouths signals a change in the fishing times along the Caribbean.

Mix things up during these months and try a coast to coast trip. Target Tarpon and Snook first then finish things up with billfish on the Pacific.

Any fishing calendar is tied to the species you are after and the fishing technique you want to practice. If you are still not sure, don’t worry.

Contact us and we’ll help you define when is the best time for you to come here, or where to go based on your schedule.